SPQ 062: Street Teams: The Key to Advanced Reviews and Initial Buzz for Your Books 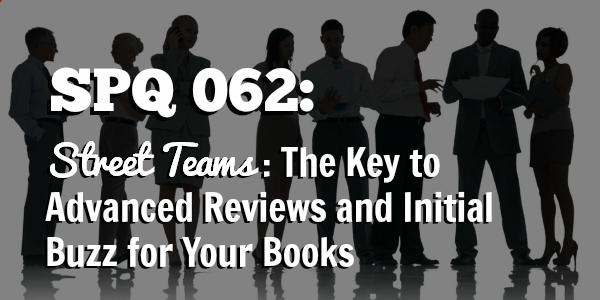 Nick asks: I have heard you, on several occasions, talk about your “street team” in regard to how you get reviews for your books when you launch them. I understand the concept with asking your list for the review, but how do you go about it? Do you just simply ask them to post favorable reviews if they enjoyed the book? I have been building lots of lists with Kindle and haven’t really tapped into them for reviews yet; I would really love to hear your thoughts on that.

Building a street team can build on the foundation of organic #reviews.

Reviews are really important. Not only do they tell people good things and bad things about your book, they also affect Amazon’s ranking algorithm. There are a lot of paid promotion sites that require a certain number of reviews before they will even consider promoting your book. Finally, if you don’t have any reviews, people might not be willing to give your book a try.

One strategy a lot of people do is review swapping. Steve is not in favor of this tactic. Basically, you’d find another author and agree to review each other’s books. This isn’t fair to readers because it’s a form of lying.

If you just launched a book two days ago, it doesn’t seem natural for it to have 100 reviews. So how can you get reviews without swapping? Build a street team.

Before you build a street team, you do need some initial organic reviews. Steve covered this extensively in episode 2, so check it out to learn more. In that episode, he gave some suggestions for getting people to leave organic reviews.

Building a street team can build on the foundation of organic reviews. You need to build a large group of people who have read your previous books and will hopefully review your new content. Steve has about 30 people on his team, so it doesn’t have to be a huge number of people. Don’t get caught up in the notion that you need a massive list.

Steve recommends a six-step process for growing your street team.

P.S. I would love to hear from you!  While it’s *easy* to connect over Facebook, Twitter or other social media sites, often it’s better to have one-on-one conversations with readers like you.

So I encourage you to reach out over email and say hi!

To get started, I would love to hear about the one thing you’ll do…this week…to turn this information into action.

Steve keeps track of his street team members with an Excel spreadsheet. You can even create a special list with AWeber, but Steve prefers one-on-one emails to build a personal connection.

It’s going to be hard to get more reviews as you publish multiple books. Steve is going to be segmenting his email list. Some people have been on his list for more than a year, so he’s going to target them. He might also target people living in the U.S.

He will ask members of this list of they want to join his street team. This helps get reviews, but it’s also sort of a reward for the people who have been with you for a long time.

SPQ 002: Steve explains how to get organic reviews for your books