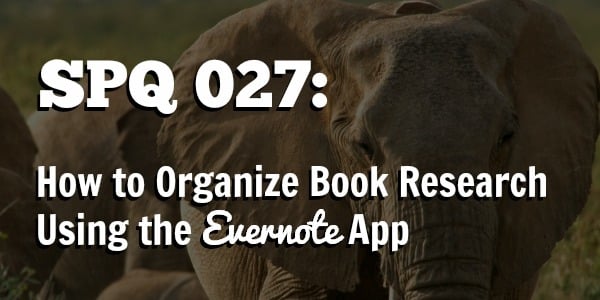 Rick is a prolific researcher who has trouble trimming extra information from his books. He wants to know how Steve decides how much research to do. Rick also wants to know how to use Evernote to organize his research.

[Tweet “Ideas pop up at random times, so make a habit of writing down EVERYTHING.”]

Ideas pop up at random times, so make a habit of writing down all of your ideas. Steve does this with his Kindle publishing checklist. The checklist has all the steps needed to move from initial idea to published book.

When Steve starts a new project, he does what he calls the “two-week idea marinade.” He writes down every idea he has on a notepad or in Evernote. He prints the Kindle checklist and adds topic ideas, quotes, tools, and ideas from old Kindle books. In some cases, he has his virtual assistant do some research. Most of Steve’s ideas go directly into his book outline, but he does use Evernote to organize information.

It sounds trite, but you need to do exactly as much research as necessary. Steve likes to add as much content as possible in the first draft. Outlining the book first really helps figure out how much research is needed. Once you write your draft, go over each section and determine if anything is missing. Look for opportunities to add bonus content to enhance the reader experience.

Evernote is available for desktops and mobile devices. There is a lot you can do with this tool, from bookmarking websites to organizing information. Evernote does so much that it can be overwhelming, so Steve recommends two approaches.

The first approach is the beginner approach. Use Evernote’s basic functions and don’t worry about more advanced features. Evernote organizes information in stacks, notebooks, and notes. Stacks are a major grouping of categories, notebooks are like the folders on your desktop, and notes are the files.

If you’re an author, you might have a stack titled “Kindle Business.” Then each notebook would be named after an individual book title, and each piece of research would be saved as a separate note. As you work on your book, you can add a new note to your notebook for that project.

The second approach is to create a stack for each Kindle book and a notebook for each type of research. You could have notebooks for resources, quotes, general text ideas, websites, and so on. If you have a notebook for websites, each individual note would contain the name of an individual website.

You should add tags to your individual pieces of research. Evernote acts like a search engine; if you enter a phrase, it will find any notes you’ve written on that topic. Steve uses #Kindle and #website. If you’re writing a book about the wheat belly diet, you could use #wheatbelly.

If you use the second approach, you need a good organizational system. Combining Evernote’s basic architecture with the use of tags makes it easier to find what you need.

Steve recommends creating a process for capturing ideas, so check out Evernote while you’re writing your next Kindle book.

Evernote: Use Evernote to organize research for your Kindle books

4 thoughts on “SPQ 027: How to Organize Book Research Using the Evernote App”