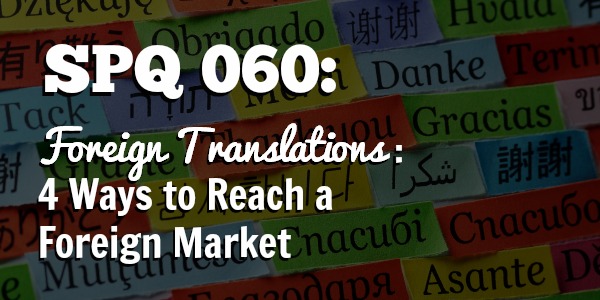 Eric of Copy Dojo, and author of “Mastermind Your Business,” asks: My question is about translating your self-published books. Is this something you’ve done? If yes, what languages have you focused on? If not, is it something you’re considering for the future? Finally, is translation something you’d recommend to other self-published authors as a means of generating additional revenue?

When it comes to foreign translations, understand your rights, esp. exclusivity.

Steve loves this question because this is something he’s currently testing. He thinks the ebook market is growing outside the United States, Canada, the United Kingdom, and Australia. The short answer is yes, it’s something he’s testing and he recommends that people do it.

Steve has been testing this strategy for about eight months, so he recommends four different tactics you can use.

One of the resources he found is PubMatch.com, which has a large database of agents and traditional publishers in other countries. Steve hasn’t really solicited any of these companies because it seems like cold emailing, and he’s not really comfortable doing that.

Steve has sold rights in Russian, simple and complex Chinese, Polish, Czech, Thai, and other languages. The prices are pretty good. It’s around $900 to about $4,000 per deal. Since he wouldn’t have had the opportunity to publish books in these countries on his own, it’s like found money.

Steve prefers publishing in languages where you don’t have any ability to publish via a platform like Amazon.com or Kobo. He keeps the rights for his books in Spanish, French, Italian, German, and Hindi. These markets are growing, so he wouldn’t have to go through a publishing company to publish in those languages.

This is a very lengthy process. It might take four to six months—or more—before you ever see a payment. Steve sometimes forgets to check for payments because it takes so long.

This site is similar to ACX. They host and market the book, acting as an intermediary. You get on the site, find a translator, and do a revenue-sharing arrangement. It does require some effort because you have to make sure the book is formatted correctly. You also have to make sure you get a translated ebook cover.

Steve has done a total of 14 translations on Babelcube, making a whopping total of $400. He also feels he’s lost the rights to 14 of these translations because you have to sign a five-year deal. It’s like working with a traditional publishing company because you lose your rights and don’t get much in return.

Steve emailed Babelcube a few days ago to see if he could get back the rights to those books. They responded favorably, stating that if it was okay with the translator, he could have his rights back. He plans to give the translator some money so she gets paid for her efforts.

Steve doesn’t like how the company is structured, but it seems like they are willing to work with authors. They are not as strict about contracts as other companies. BabelCube might be a good option if you don’t have any other options.

This is Steve’s favorite strategy right now. He has been pretty successful with this in the German and Brazilian Portuguese languages. You want to find someone who can not only do the translation, but work hard to market the book.

You also want to make sure the translator uploads to your author dashboard. Steve wouldn’t take advantage of a partner, and everybody he has hired has been honest, but he wants to maintain control over how the book is marketed and presented.

It’s also necessary to pay for editing. You don’t want to publish a translated book until you have an editor go through and make sure the book is as good as it could be. Have your partner find some beta readers to leave reviews. Do a 50/50 split with your partners and start using KDP Select to get some initial sales.

When you get started, test one book to see how it works in a particular language before you scale up. This can help you avoid wasting time and money.

Steve is currently testing this option. With this strategy, you take the idea of a revenue split out of the equation. You find someone who is good at translating in a particular language. You have full control and keep all of the profits.

Steve recommends trying this in languages you can upload directly to Kindle Direct Publishing: Spanish, German, French, Portuguese, and Italian. There are a lot of people who speak these languages, and ebooks are a growing market for these languages.

Take a look at your books and see which ones sell the best before you decide which ones to translate. The drawback of using this strategy is the significant investment required. It can cost five to ten cents per word for translation, and you also have to pay for cover design, translation, and formatting. It can be $2,000 or more to finish a translated title.

From here, you should scale your business. You can make good money by adding more of your existing books in a particular language. You could also have your lead magnet translated into another language so you can build new email lists. Steve did this with Brazilian Portuguese.

You should also run KDP Select promos to get a lot of visibility in other languages. Then scale by translating your books to more languages.

Steve is really excited about the possibilities with creating foreign-language titles. Amazon UK and Amazon Australia are becoming very competitive platforms. You need to think about how you are going to leverage your content.

Mastermind Your Business: Learn how to start a successful mastermind group to grow your business

Self-Publisher’s Legal Handbook: Protect yourself by learning about contracts and other legal issues faced by business owners

PubMatch: A database of agents and publishing companies for people interested in buying or selling international book rights

Babelcube: Connect with translators and sell your book globally