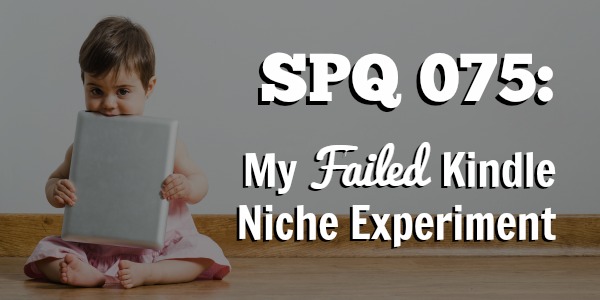 I know you’ve mentioned a few times that you tried to publish a series of children’s books on Kindle. I’m wondering if you’d do a podcast where you went into exactly why you decided not to move forward with it, and why you think children’s books don’t do well on Kindle. Is it because it’s harder to build a platform when you are trying to market kids’ books? I’m curious because I’ve published a series of kids’ books, and it’s definitely a challenge. I’m only selling about five books per day. I’d love to hear the lessons you learned.

Look at and learn from what successful authors in your niche are doing.

Not many people ask about his experience publishing kids’ books. Surprisingly, he learned more from that failed experiment than he has by publishing some of his other titles.

Children’s books aren’t necessarily hard. There are people who do well, but it’s a matter of figuring out how they do well and reverse engineering it so you can learn from them.

For this experiment, Steve used the pen name P.K. Miller. He published two types of books: picture books about specific animals and theme books. He outsourced much of the process because he was busy with his other projects. Ultimately, the whole experiment was a complete failure, for a few reasons.

Reason #1: The model was easy to replicate. As soon as he’d publish a theme book, he’d notice there were a bunch of clones published on Kindle. It was easy to take his idea and create a quick knockoff. Anyone with enough willpower could clone the content in about a day.

This is what’s called a low barrier to entry. If anyone can do it, anyone *can* do it. This doesn’t give you a sound footing for your business. Steve learned he had to stand out in the marketplace.

Reason #2: The content was very thin. Steve didn’t include any personal anecdotes; he just wrote about animals. Much of the content was outsourced, so the writer didn’t have any skin in the game as far as making the content as good as possible.

Reason #3: Steve didn’t have a platform for his kids’ books. He had a free offer, but only a few people joined his list. The conversions were horrible. He didn’t have a blog, YouTube channel, or podcast that would support his books on the back end.

Reason #4: It was the reverse of the 80/20 rule. When he was working on the animal books, about 20 percent of his results were coming from 80 percent of his effort. Steve was spending a lot of time on books that weren’t making money. He decided his time and money would be better spent working on other books.

Reason #5: Steve didn’t really have passion for writing children’s books. When you start chasing money as the only reason to do something, that’s when you start making mistakes. The first four reasons for the failure of this experiment could have been resolved if Steve had passion for the topic.

These lessons taught Steve how to succeed with Kindle publishing. He took what he learned and applied it to his Kindle strategy.

Catherine sounds like she’s really into the children’s market. Steve recommends tracking down successful children’s book authors and reverse engineer what they are doing. Find successful authors by looking at the sales rankings for their books.

Look at what these authors are doing. Are they covering fiction or nonfiction topic? What age range are they targeting? Buy some of their books and check out the sales funnels. Do the authors have an email list or podcast? Reach out and try talking to these authors. Many authors are willing to share their secrets of success.