SPQ 051: Knock Off Books: What Can I Do About Copycat Authors? 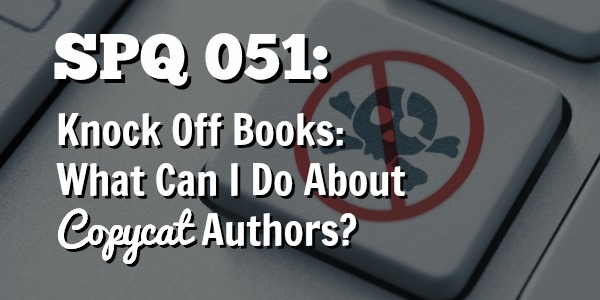 What do you do about authors who publish books extremely similar to the ones you publish? I have noticed books with very similar covers and content in the marketplace.

Report the problem then focus your energy on driving your business forward.

This is a very touchy subject, and a lot of people get very emotional about it. No one likes to see their hard work get ripped off by someone who outsourced the work to a writer in a foreign country. Steve understands what this is like because his content is ripped off all the time.

Let’s start with the people who completely ripped off one of your books. These are the people who barely even made an effort to disguise the fact that they rehashed your content. Go through the book and make sure it was completely stolen from you. Then contact Amazon directly to report the problem.

You only want to do this for the egregious rule breakers—the ones who have absolutely ripped off your books. Steve tried to do a translated version of one of his books in Italian, but he found that someone had already taken his content and put it in Italian. He emailed Amazon directly, and they were really quick about removing the copied book.

When Steve wrote “Habit Stacking,” it was the only book on Amazon with that title. Suddenly, there were 30 more books with similar titles. He tries not to worry too much about it, but a few of the books were absolutely ripped-off versions of his books.

Stephen Guise has a book called “Mini Habits” that people have ripped off. He emailed Amazon, and Amazon made some people change their books.

Someone took one of Steve’s books and put it on the Barnes & Noble Nook platform. Amazon threatened to remove the book from KDP because the content was supposed to be exclusive to Amazon.

There are cases where people are just lazy, and they feel the path to success is ripping off other people’s work. That’s when it’s time to contact Amazon.

Pick and choose your battles, though. A lot of get-rich-quick gurus recommend finding out what is selling and then rewriting it. It’s really hard to fight this battle. Your time is better spent writing and publishing new books.

It’s not good to let people steal your books, but if you worry about it constantly, you’re using up precious capital that you could be using to write other books.

You also need to build a platform around your books. People are smart, so they are getting better at detecting knockoff books. If they see a 30-page book, they usually think the content isn’t very good.

People want to hear about what you have to say, not just what is in the 30 or 40 books on the same topic. Focusing on your author platform helps you understand what your audience wants. In episode 47, Steve talked about polling your audience and creating unique content based on the problems you uncover.

When you continuously provide content that solves problems, you’re the innovator. This is the best way to build a book-based business. Don’t worry so much about what other people are doing; Amazon is going to get wise to them, and they will suffer the consequences.

If you feel your particular concept is a major part of your brand or marketing message, you can trademark a phrase with the intent to use it elsewhere. Steve’s “Habit Stacking” book sold well, but it got a lot of negative reviews, so he’s working on a second version. He intends to use it as a flagship product with a website built around it.

He paid $2,500 to a trademark attorney to trademark the term “habit stacking” as his intellectual property. If you really feel your book can be used as more than just a book title, trademark it so you can use it in other ways.

It’s not a great feeling to work hard and see people take the lazy way out, but it’s going to happen no matter how hard you fight. This is what people are being taught. Contact Amazon about the egregious copiers, but spend most of your time doing things to drive your business forward.

To learn more about self-publishing as a business, check out Steve’s income reports and see what resources he recommends.

Contact KDP: Let Amazon know if someone has copied one of your books

SPQ 047: Steve discusses the importance of polling your audience to find out what they want

Steve’s Self-Publishing Income: Steve shares how much he has earned from his self-publishing projects

Recommended Resources: Steve recommends these resources to help you with your self-publishing business